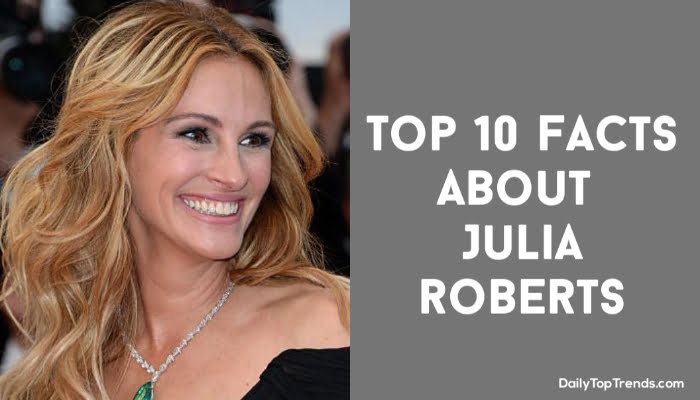 10 Facts About Julia Roberts , full name Julia Fiona Roberts, is an American actress who was one of the highest-paid and most prominent actresses in the 1990s and early 2000s because of her skillful performances in a variety of roles. Roberts was born in Smyrna, Georgia, on October 28, 1967.

Did you know that  Pretty woman wasn’t the first choice as title of the film turns out back when the film was a more serious affair than a fairy tale romance the film was titled $3000 which is the amount that Edward paid Vivian to spend six days with him.

Pretty woman wasn’t written as feel-good fairytale romance to begin with the film was meant to be a dark drama where Vivian is a drug addict and not a prostitute however when Disney got involved with the production they changed the tone of the film to make it more palatable to the audiences.

Like Disney changed the tone of the film did you know that Disney also changed the ending for pretty woman Vivian and Edward weren’t meant to end up together in the original script from a studio head of Disney Jeffrey Katzenberg reveled in March 2017 that the ending was a whole lot darker heap screenplay for a pretty woman who wanted to see an R-rated movie.

You’ve seen the iconic poster of a pretty woman with Roberts and Gere standing back to back but did you know that the woman in the poster is not actually Roberts herself yup! turns Roberts body double posted the iconic poster shot and the actresses head was later photoshopped onto it.

While we can see had any other way than having Roberts and gear playing the lead couple of the film, director Gary Marshall apparently had Al Pacino and Michelle Pfeiffer in mind as the leads for the pretty woman.

6. Actresses almost cast as Vivian : Vivian’s role was heavily coveted part and everyone from Sandra Bullock to Drew Barrymore and from Madonna to meg Ryan were up for the part even Molly Ringwald known for starring in the Breakfast Club almost got cast as Vivian but she reveled in April 2012 that she turned the part down because she felt it was Roberts’s part all along.

The iconic red gown that Vivian wears to her opera date with Edward was actually going to be a black number but reportedly costume designer Marilyn Vance pushed for Vivian’s dress to be red instead of black and that turned out to be the best.

Do you remember the adorable jewelry box scene and pretty woman when Edward jokes with Vivian by snapping the jewelry box in her hand just as she’s about to touch the neck piece turns out that was an improvisation on gears part director, Marshall told Entertainment Tonight the story of that moment in 2012.

Gere Didn’t think pretty woman would become the success that it did because he found the script dull even when he signed on to play the leading man.

Gere’s Big piano piece turns out more than just a jewelry box scene gear made a major contribution to pretty women. Apparently the piano piece that Edward plays in the film was composed by the actor himself and he was also rather obviously playing the keys himself.